No Yes
The campaign “Give a box, give a smile” was spearheaded by (from left to right) Kerstin Petermann, Guido Eyer and Achim Kotz (BPW), Michael Lang (OLS), Renate Kotz (Re:Help), Kira Fink and Peter Schneider (BPW), and Navid Thielemann (OLS).

“Give a box, give a smile” – giving campaign supports children in Nepalese mountain village

Wiehl, 10.04.2018 --- The aim of the campaign entitled “Give a box, give a smile” was to help the 371 children who live in the Nepalese mountain village of Rapcha and to bring a smile to their faces.Together with the shipping experts of Overseas Logistic Services (OLS) GmbH and the charity Re:Help, the works council of Bergische Achsen KG has now delivered almost 400 aid packages to families living there in impoverished conditions. Each child was presented with one of the boxes in a special ceremony.

They contained things like a warm hat, a hairbrush, soap and pencils – everyday items for us, but precious luxuries for the children of Rapcha. BPW employees packaged all these and other treats in cardboard boxes. “For nutrition, the 2,000 inhabitants of the village depend entirely on the crops they cultivate themselves. They are lacking practically every conceivable resource. Many of the things we regard as normal are simply beyond their reach,” remarks Renate Kotz, who is the chair and founder of Re:Help. She got to know Rapcha around six years ago during a three-month spell of voluntary work in India and Nepal. She was taken to the village by a mountain guide who was raised there. Re:Help was founded for the purpose of providing long-term support for Rapcha. The mountain guide Pancha Rai remains the local point of contact and played an instrumental role in the giving campaign.

The original idea for “Give a box, give a smile” was spawned by the BPW works council, which also recruited both Re:Help and the company Overseas Logistic Services GmbH to the cause. Its managing director Michael Lang comments, “As a global expert in sea and air freight, as well as project and steel logistics, we possess extensive overseas shipping experience and were delighted to support the campaign with our specialist knowledge.” His fellow director Navid Thielemann adds, “Know-how is essential in a shipping project like this, in which customs clearance alone is an especially thorny issue. Even when the application is very well prepared, there’s no absolute guarantee that the goods will be cleared for entry. We are delighted that the operation proceeded so smoothly in this case.” 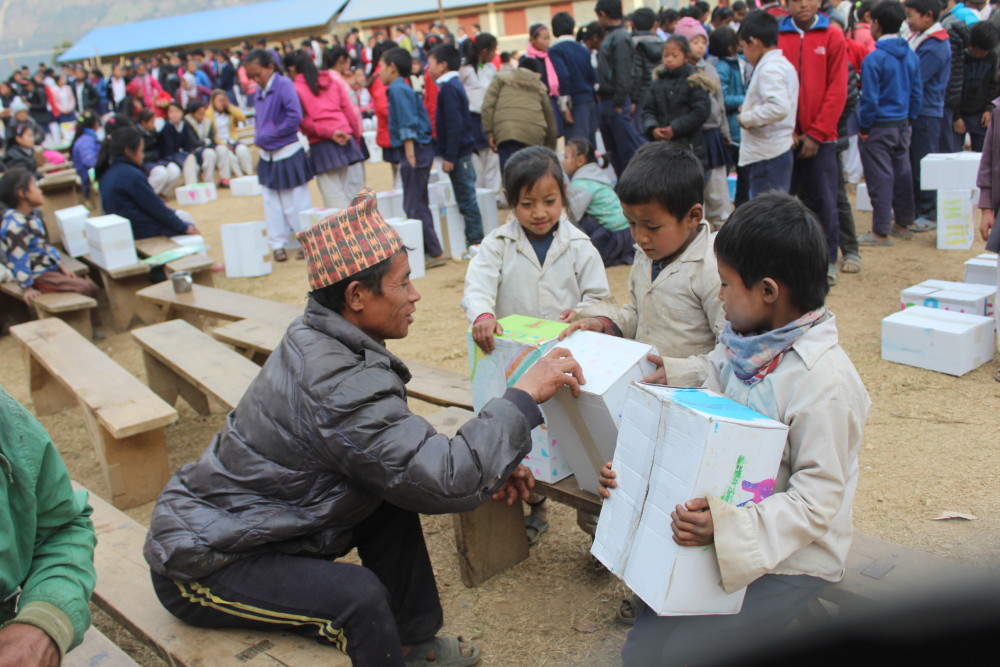 The packages were in transit for about eleven weeks. At the end of November they were flown from Frankfurt via Bangkok to Kathmandu. Customs clearance was not granted until the beginning of February. In mid-February the boxes were finally delivered to Phaplu Airport. It takes two days to walk from the airstrip to the village of Rapcha. A tractor provided some assistance, but local inhabitants transported the boxes on foot for a large portion of the journey. They were given a warm reception by the other village dwellers and, in particular, by the children, who were thrilled with the gifts from Germany.

“We were especially determined that the children should receive the parcels directly from us,” says BPW works council member Peter Schneider, “and that there should be a box for every single child.” Thanks to many helping hands, these wishes were fulfilled. The 400 boxes were packed by BPW employees in Wiehl within just a few weeks. Apart from a hat, scarf, cosmetics and school items, each one also contained personal gifts, such as cuddly animals or toys. “Lots of the boxes were lovingly decorated for the children,” reports Kira Fink, who for several months oversaw the project on behalf of the BPW works council alongside Peter Schneider. “In many cases, parents talked to their own children about living conditions in Nepal and the families then selected the items that were to be sent together.” BPW subsidiaries that were eager to support the campaign donated an additional 1,300 euros.

About Overseas Logistic Services GmbH
OLS was established in Mönchengladbach in 1997 and now ranks among the leading overseas transport companies in western Germany. Its core business encompasses sea and air freight, as well as project logistics. It has also been very active in the steel logistics segment ever since its foundation. The company draws on the resources of a global network to develop bespoke solutions for its clients while helping to enhance the related logistics processes. www.ols.de

Among German SMEs, no company can claim to have more loyal employees than BPW Bergische Achsen KG. In the latest round of the independent and anonymised TOP JOB survey, the family business’s employees give their employer top marks for communication, development and prospects. Compared with their counterparts in other companies, the employees of BPW are especially loyal.

For many years BPW Bergische Achsen KG has ranked among Germany’s top employers, as recently reconfirmed by the magazine Focus Business. It has now been recognised as the fairest employer in its industry. The accolade is the outcome of a new ranking produced by Faktenkontor with academic support on behalf of Focus Money and Deutschland Test.

About the BPW Group
The BPW Group researches, develops and manufactures everything needed to ensure that transport keeps moving and is safe, illuminated, intelligent and digitally connected. With its brands BPW, Ermax, HBN, HESTAL and idem telematics, the company group is a preferred system partner of the commercial vehicle industry around the globe for running gear, brakes, lighting, fasteners and superstructure technology, telematics and other key components for trucks, trailers and buses. The BPW Group offers comprehensive mobility services for transport businesses, ranging from a global service network to spare parts supply and intelligent networking of vehicles, drivers and freight. The owner-operated company group currently employs 7,000 staff in more than 50 countries and achieved consolidated sales of 1.41 billion euros in 2019. www.bpw.de/en