Vilshofen/Wiehl, 30.01.2018 --- The electrification of municipal and commercial utility vehicles is now gathering pace following today’s announcement by the Paul Group, a European leader in special-purpose vehicle construction, of a standard conversion package for the Mercedes-Benz Vario in collaboration with BPW Bergische Achsen KG. The company revealed its plans at a preview for local authorities in Vilshofen in Bavaria.

The ingenious operation entails the complete removal of the conventional powertrain, consisting of the engine, transmission, differential etc.. Propulsion is provided by a new type of electric axle supplied by the transport and running gear specialist BPW. The conversion does not give rise to a heavier vehicle because the elimination of the engine, transmission and emission control system compensates for the additional battery weight. In fact, electrification actually makes the vehicle more agile. Torque substantially increases, for example, and the wheels can be activated individually. In addition, active steering control for the rear axle reduces the turning circle.

In view of its ruggedness and technical attributes, even after the official end of its production run the MB Vario remains one of the most popular platforms for the utility and special-purpose vehicles operated by local authorities, the police and armed forces, as well as numerous commercial enterprises. Its high payload, uncompromising reliability and large cab predestine the van for a variety of conversions. Special-purpose vehicles regularly have long service lives because they are operated only seasonally, and an electric successor to the MB Vario from the Mercedes stable is not currently in sight. Giving consideration to their operating profiles, moreover, municipal utility vehicles are ideal candidates for electrification. Many of them cover less than 100 km a day and are loaded at the same depot every evening. 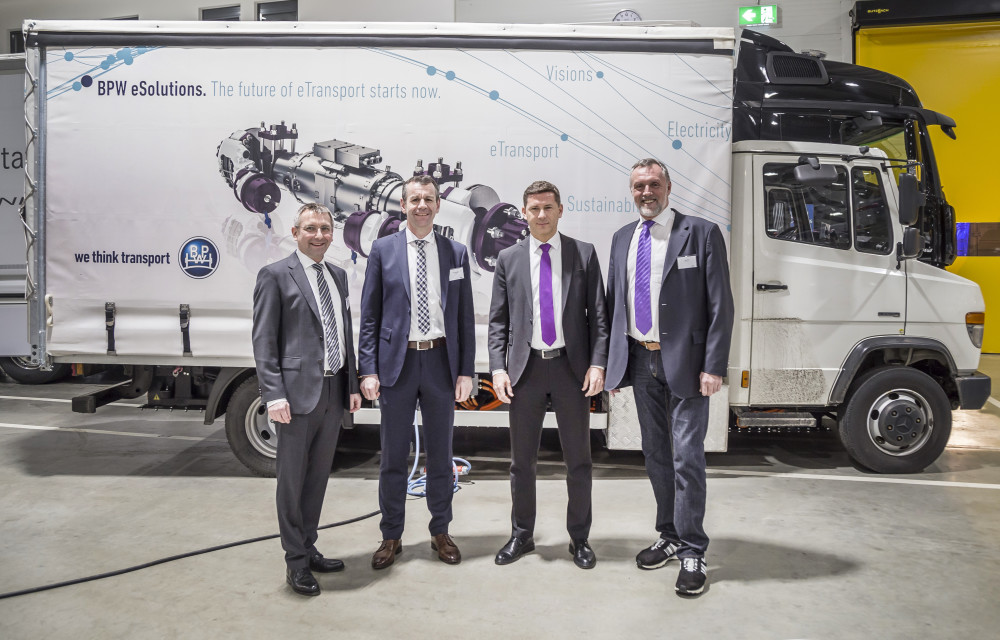 Walter Pötzinger (1st from left), managing director of Paul Nutzfahrzeuge GmbH, comments, “Many authorities could ultimately be compelled to issue driving bans contrary to their own interests, given that they rank among the largest operators of diesel-powered commercial vehicle fleets. Electrification can allow their vehicles to remain in service for a much longer period. It is an economically viable option, especially since the e-drive costs less to operate and maintain than an internal combustion engine.”

Markus Schell (3rd from left), personally liable managing partner of BPW, remarks, “The standard conversion programme initiated by Paul sends an important message that has been eagerly awaited by fleet operators in the municipal, public agency and business sectors. But it also represents a crucial milestone on the road towards electric transport in general. We are delighted to have this opportunity to build on our long-standing mobility and system partnership with the company in the electric vehicle segment as well.”

About Paul Nutzfahrzeuge GmbH
Headquartered in Vilshofen an der Donau in Lower Bavaria, Paul Nutzfahrzeuge GmbH ranks among the European leaders in special-purpose vehicle construction. In recent years this division of the Paul Group has emerged as an accomplished global player serving customers the world over. Every year its running gear experts carry out chassis conversions, axle modifications, frame extensions, and special configurations on as many as 1,000 commercial vehicles. Paul Nutzfahrzeuge GmbH currently employs around 150 people.

eTransport, the electric axle drive developed by BPW, is thought to have won more innovation prizes this year than any other concept in its category. BPW has now added the European Transport Prize for Sustainability to its trophy cabinet. The company ranks among the heavyweights in the true sense of the word, not only in view of its multiple awards.

eTransport, the electric axle drive developed by BPW, has grabbed first prize for mobility in the finals of the Energy Awards. The accolade recognises the drive as one of the most innovative ideas in the drive towards renewable energy sources. The Energy Awards serve the purpose of highlighting progress and changes being made in the sector, and acknowledging outstanding projects and ideas.

In Berlin on Friday BPW Group was presented with second prize for its electric axle drive eTransport in the GreenTec Awards, which rank among the world’s leading environmental innovation distinctions. The axle is targeted at electric urban delivery vehicles between 7.5 and 18 tonnes – a segment in which vigorous growth continues to be fuelled by online sales.

Minister-President Armin Laschet sees North Rhine-Westphalia (NRW) as a leading centre of innovation in e-mobility and of Industry 4.0 in Germany. On the recommendation of the state parliamentary representative Bodo Löttgen of the CDU party, he visited BPW in Wiehl to familiarise himself with novel drive concepts and production methods, and the digitally interconnected world of logistics.

About the BPW Group
The BPW Group researches, develops and manufactures everything needed to ensure that transport keeps moving and is safe, illuminated, intelligent and digitally connected. With its brands BPW, Ermax, HBN, HESTAL and idem telematics, the company group is a preferred system partner of the commercial vehicle industry around the globe for running gear, brakes, lighting, fasteners and superstructure technology, telematics and other key components for trucks, trailers and buses. The BPW Group offers comprehensive mobility services for transport businesses, ranging from a global service network to spare parts supply and intelligent networking of vehicles, drivers and freight. The owner-operated company group currently employs 6,945 staff in more than 50 countries and achieved consolidated sales of 1.632 billion euros in 2021. www.bpw.de/en